As part of the ongoing effort to support the transition to Care Coordination Organizations/Health Home (CCO/HH) services, the Office for People With Developmental Disabilities (OPWDD) is offering a series of Informational Sessions for Medicaid Service Coordinators (MSCs). The Informational Sessions will be available via WebEx as a 30 minute webinar every second and fourth Wednesday of the month at noon. Each half hour session will also be recorded for later viewing and posted on the OPWDD website.

The topics will be:

Click HERE to register through WebEx for the December 27th sessions and subsequent sessions.

After you enter your information into the WebEx registration, you will receive a confirmation email from WebEx with information regarding how to join the day of the session.  If you have any issues, please contact Talent and Development by email at talentdevelopment@opwdd.ny.gov or by phone 518-473-1190. 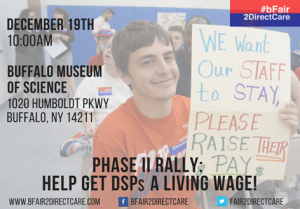 There will also be rallies December 19th in Rochester and December 20th in Syracuse – more information and invitations to follow.

Following a very successful December 4th kickoff event in Brooklyn, Phase II of the #bFair2DirectCare campaign staged another well-attended news event at the Capitol in Albany on December 6th.  Former state Assemblyman Harvey Weisenberg, current state lawmakers and others joined people with disabilities, families, direct support professionals (DSPs) and other advocates at the event to urge Governor Cuomo and the Legislature to speed up a plan to pay DSPs a living wage.

Mr. Weisenberg and others representing the #bFair2DirectCare coalition also presented a cake to the Governor’s aide to thank Mr. Cuomo for his support and to wish him a happy 60th birthday.  The rally was held in the State Capitol’s “War Room,” where the Governor promised a similar throng last March that he would not sign a state budget that did not include the first phase of living wage funding for DSPs.

The state budget that passed earlier this year includes the first of six installments to raise DSPs closer to a living wage. The first $45 million for developmental disability nonprofit staff funding is scheduled for January 1, 2018.

Given the worsening staffing crisis, DSPs can’t wait six years, as was originally planned.  The #bFair2DirectCare coalition is requesting an acceleration of the remaining funding so as to achieve a living wage by 2020.

Legislators in all major parties and in both chambers of the Legislature have lined up in support of the drive to raise these critical workers closer to a living wage.

People from all across the state, including individuals from CP of NYS Metro Services, Jawonio, CP of Long Island and CP Westchester, attended the event in Albany. 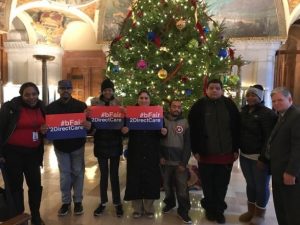 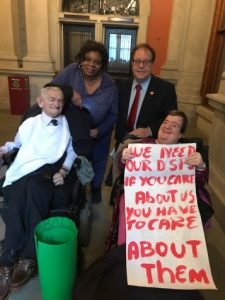 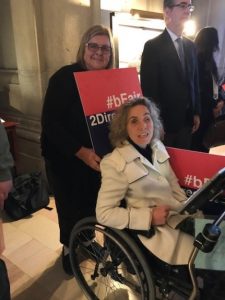 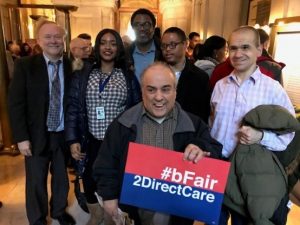 Barbara Crosier from CP of NYS, along with her COPA colleagues Winifred Schiff from IAC, and John R. Drexelius from DDAWNY, presented testimony to the New York State Assembly Standing Committee on Mental Health and Developmental Disabilities hearing on housing for people with developmental disabilities.

The testimony raised three main issues in residential services for people with developmental disabilities that need to be addressed to begin to fix the housing dilemma: staff shortages; development, modification and transformation funding shortages; and systemic roadblocks.

The hearing can be viewed HERE.

CP of NYS and our COPA colleagues sent a letter to Senator Gillibrand on the impact of the Senate and House tax bills that are being negotiated and the impact on New Yorkers with developmental disabilities.  The letter thanked Senator Gillibrand for all her advocacy and outlined the federal tax bills’ potentially devastating impact on supports and services for New Yorkers with developmental disabilities.  CP of NYS staff have been working with the Senator’s office to ensure disability concerns are part of the Senator’s response to the federal tax bills.

CP of NYS and our colleagues have grave concerns (outlined above in the letter to Senator Gillibrand) about the impact of the new federal tax bill on people with disabilities, their families and their supports and services.  Congress is expected to vote on the new tax bill next week and send to the President to sign before Christmas.

Therefore, it is extremely important that you reach out to your Congress member and tell them to VOTE NO on the NEW TAX BILL!  This may be the most important vote of the year with the most far-reaching impacts for every individual and every family in the country!

Senator Schumer and Senator Gillibrand and all of the House Democrats are strongly opposing these harmful tax bills.  Five NY House Republicans voted NO on the House tax bill but we have no way of knowing how they will vote on this new version.

It is particularly important to call Republican House members and ask them to vote NO on the tax bill.

A short script you can use is:

Tell them to VOTE NO on the NEW TAX BILL.

The following NY House Republicans voted NO on the House Tax bill:

Please contact your NY House members TODAY and ask them to PLEASE VOTE NO on the new TAX BILL!

COPA sent a Save the Date announcement on 12/5/17 and will be sending hotel and lobby day registration shortly.

Please mark your calendar and join us for the 2018 COPA Albany lobby days!

CP TO OFFER ONLY NATIONALLY ACCREDITED SUPERVISORY TRAINING IN SPRING 2018

CP of NYS has partnered with the New York City-based Training Collaborative to offer their nationally accredited supervisory training program to Affiliates across the State.  The training series, developed by Peg Gould and the partners in the NYC collaborative, will be offered over 5 months in 2018 (February – June) and is an important component of the field’s broader effort to stabilize a qualified workforce.  In the development of the series, particular attention was paid to ensure this supervisory skills training included the necessary development and understanding of the core competencies in direct care staff.  This series also can be used for you to train staff who might then be able to provide this training locally at a future date in conjunction with the Training Collaborative and CP of NYS.

The Office of Health Insurance Programs (OHIP) has established the Bureau of Social Determinants of Health within the Division of Program Development and Management (DPDM).

The new bureau will focus on the social determinants of health (SDH) and the important role it plays in the health outcomes of New York’s most vulnerable populations. The Bureau of Social Determinants of Health will focus on special SDH initiatives including but not limited to supportive housing, nutrition, and education. The bureau plans to work closely with Performing Provider Systems (PPS), Value-Based Payment (VBP) contractors, Health Plans, and Providers. It will also continue to enhance the role of Community Based Organizations (CBOs) within the health care sector.

The Bureau will be led by Denard Cummings and report to Elizabeth Misa, Deputy Medicaid Director.

You can send any questions to mrtsupportivehousing@health.ny.gov.

OPWDD ASKS FOR COMMENT ON ITS DRAFT TRANSITION PLAN

OPWDD has published a draft Transition Plan for public comment which lays out New York State’s plans to better integrate services based on person-centered planning for people with developmental disabilities.

The Transition Plan is a required element to enable people with developmental disabilities to move to New York State’s 1115 Waiver, and for the development of Care Coordination Organization/Health Home Services (CCO/HH).

The Transition Plan can be found online HERE.

OPWDD is asking for comments from the public from now until January 5, 2018. Comments may be submitted to HHIDD@health.ny.gov.  Please use the phrase “OPWDD Transition Plan Comments” in the e-mail subject line. It is also helpful if comments include the page number and section of the Transition Plan referenced.

OPWDD filed an emergency/proposed regulation to update the Supplemental Nutrition Assistance Program (SNAP) benefit offset for supervised CRs and supervised IRAs.  The text and memo for this emergency regulation can be accessed HERE.

TRAIN TO BECOME A POWERFUL SELF-ADVOCATE

YOUTH POWER! is now accepting applications for the New York Institute for Self-Advocacy (NYISA), YP!’s newest initiative to train young adults (21+) with developmental disabilities to advocate for themselves and their peers. Graduates from the institute will go on to become part of the Emerging Leaders Network, helping others across New York State become fellow self-advocates.

The four-day event takes place March 10-13, 2018, at the Hilton Garden Inn in Troy. To apply, visit www.YOUTHPOWERNY.org/nyisaapp. The deadline for applications is January 28. If you have any questions or require a Microsoft Word application form, please contact Zack Kilmer, NYISA Coordinator, at zkilmer@youthpowerny.org or 518-708-3808.

For more information on the New York Institute for Self-Advocacy, visit www.YOUTHPOWERNY.org/nyisa.

The Board of Directors of AccessCNY and Spaulding Support Services voted recently to merge the two agencies. The combined agency will serve over 3,200 people with disabilities and operate under the name AccessCNY. Beginning January 1, Spaulding will become a subsidiary of AccessCNY. In the intervening months the agencies will begin to share staff, space and administrative tasks. The two agencies are expected to fully merge in the summer of 2018.

The combined agency will employ over 1,700 Central New Yorkers and have a shared budget of over $42 million. The Central New York Community Foundation provided funding for this collaboration through their Strategic Partnership Fund. The merger is being facilitated by the New York Council of Non-Profits.